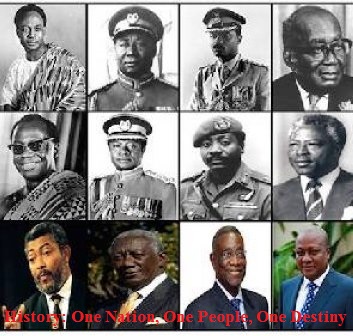 The Best of SMC I/II & The National Anthem

LEST WE FORGET-The National Pledge, The Seven Charter of Redemption and The Ghana National Anthem

On 13 January 1972, one Colonel Ignatius Kutu Acheampong, announced the overthrow of Professor Kofi Abrefa-Busia-led Progress Party (PP) in what historians describe as a bloodless coup d’état. Among some of the reasons attributed to the military putsch were as usual, economic mismanagement, ostentatious lifestyle of the civilian politician and the denial of the democratically-elected government to meet the basic needs of the members of the Ghana Armed Forces- here, on the supply of kako (salt-fish).

By 30 March 1978 the said power-drunk and one-man-showmanship- Kutu Acheampong, was driving the Ghanaian to an experimental political system- he termed it- Union Government (UNIGOV). This idea, it is observed, had emerged against the backdrop of the well-known democratic deficits that party-political engagement- breeds intolerance, enmity among the citizenry and across ethnic/tribal alliances and suspicions which in turn hinder national cohesion and accelerated development. With our current democratic trials and the cries over winner-takes-all, one could argue that Acheampong was a visionary. But the other argument is: how could we have given such a political leeway to pro-Nkrumahist soldier?

In his article- ‘Remembering Kutu Acheampong and his Unigov’, Journalist Ebo Quansah, has this to say about the outcome of the referendum for which Mr. Justice Isaac Kobina Abban, was then the Electoral Commissioner. “According to the official figures released, a total number of 4,497,8703 people were registered to vote. Out of this figure, 2, 282,813 actually cast their votes. According to official figures released, 1,372,427 voted Yes. This figure represented 60.11 percent of the total vote. No registered a total of 910,386 or 30.89 percent of those who actually voted. The release of the figures rather increased agitation in society. The Professional bodies down their tools while students of the three universities abandoned the classroom. On July, 1, 1978, Lt.Gen. F.W.K. Akuffo, then Vice-Chairman of the Supreme Military Council (SMC I) and Chief of Defence Staff, announced the Palace coup that toppled Acheampong.” The political death of Kutu-Akuffo’s SMCI/II came on June 4 1979. Least could be told about their stewardship. Yet, find below some of their enduring policies and the national anthem:

I promise on my honour to be faithful and loyal to Ghana my Motherland.
I pledge myself to the service of Ghana, with all my strength and with all my heart.
I promise to hold in high esteem our heritage, won for us through the blood and toil of our fathers;
and I pledge myself in all things to uphold and defend the good name of Ghana.
So help me God.
…

The Seven Charter of Redemption

1) One Nation, One People, One Destiny;
2) Total manpower development and deployment;
3) Revolutionary discipline;
4) Self-Reliance;
5) Service to the People;
6) Patriotism and International Brotherhood;
7) Mobilization of the Spiritual, Intellectual and Will Power of the People.
….

God bless our homeland Ghana,
And make our nation great and strong,
Bold to defend for ever,
The cause of Freedom and of Right.
Fill our hearts with true humility
Make us cherish fearless honesty,
And help us to resist oppressor’s rule
With all our will and might for evermore

Hail to thy name, O Ghana,
To thee we make our solemn vow:
Steadfast to build together
A nation strong in Unity;
With our gifts of mind and strength of arm,
Whether night or day, in mist or storm,
In every need what’er the call may be,
To serve thee, Ghana, now and evermore.

Raise high the flag of Ghana
And one with Africa advance;
Black star of hope and honour,
To all who thirst for liberty;
Where the banner of Ghana freely flies,
May the way of freedom truly lie
Arise, arise, O sons of Ghanaland,
And under God march on for evermore.
…..