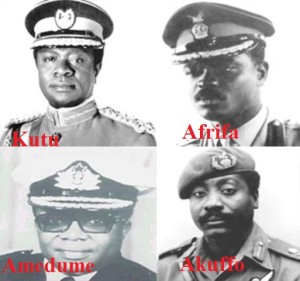 …A Political Tribute to “Fa wo to Begye Golf” under the Supreme Military Council (SMC) Regime and the controversial Single-source Procurement under Article 40 (1) of the Public Procurement Act, 2003 (Act 663)

Do you know that one of the unpardonable evils of the Kutu Acheampong-Kwasi Akufo SMCI & II regimes in the 1970s were the regulation and the control of the so-called Import Licenses? By this military policy or should we say decree, any Ghanaian or should we say business person, wishing to import any goods into our country was required to seek express clearance from the Government.

This measure became so unpopular that it gave birth to one of the reasons for the eventual overthrow of that regime in 1979 because it degenerated into nepotism, favouritism, bribery and corruption as only the affluent and sympathizers of the regime became middle-men and women in the issuance of the said licenses. Most history enthusiast might have heard about one Acheampong’s unpopular accolades- “fa wo to begye golf” mostly associated with power and beautiful women who influenced the SMC regime.

Today- 2015 (36 years on) what political sense do we make out of the so-called- Single-source procurement under the – Public Procurement Act, 2003 (Act 663), where at the discretion of our governments, had been able to allocate contracts to its party activist without seemingly rigours tender?

Article 40 (1) Public Procurement Act, 2003 (Act 663) states as follows: A procurement entity may engage in single-source procurement under section 41 with the approval of the Board,
(a) where goods, works or services are only available from a particular supplier or contractor, or if a particular supplier or contractor has exclusive rights in respect of the goods, works or services, and no reasonable alternative or substitute exists;

(b) where there is an urgent need for the goods, works or services and engaging in tender proceedings or any other method of procurement is impractical due to unforeseeable circumstances giving rise to the urgency which is not the result of dilatory conduct on the part of the procurement entity;

(c) where owing to a catastrophic event, there is an urgent need for the goods, works or technical services, making it impractical to use other methods of procurement because of the time involved in using those methods;

(d) where a procurement entity which has procured goods, equipment, technology or services from a supplier or contractor, determines that
(i) additional supplies need to be procured from that supplier or contractor because of standardisation;
(ii) there is a need for compatibility with existing goods, equipment, technology or services, taking into account the effectiveness of the original procurement in meeting the needs of the procurement
entity;
(iii) the limited size of the proposed procurement in relation to the original procurement provides justification;

(e) where the procurement entity seeks to enter into a contract with the supplier or contractor for research, experiment, study or development, except where the contract includes the production of goods in quantities to establish commercial viability or recover research and development costs; or

(f) where the procurement entity applies this Act for procurement that concerns national security, and determines that single-source procurement is the most appropriate method of procurement.

By the contents of this provision, it appears that government officials and their chosen agents or assigns, could directly/indirectly interfere with the tender/procurement processes as was the practice in SMC era?