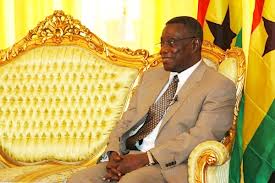 As governmental institutions, agencies, embassies and consulates- both at home and abroad, swiftly-and-solemnly pull or lower down his presidential portraits off the walls of their offices with hesitations, disbelieve, fingers-pointing and his families  feud over his final passage, stood those who still ponder over what Law Professor J.E.A. Mills, would have wished to be remembered for when Parliament moved, to ordain John Dramani Mahama, as his next-of-kin.

“The Man Atta Mills”; as the Ghanaian Mirror captioned him on Saturday; 30th October 2004 at page 9, was described as follows: “Principled & Honest; Dedicated & Hardworking; An Effective & Reliable Leader; A Ghanaian for All Ghanaians; and A Man of Achievement.” We at JusticeGhana would like to remember ex-President John Evans Fiifi Atta-Mills, who has passed away aged 68, as a warm, passionate and unpredictable man with a fine sense of humour.

Mills strove to be focused even in the face of political boos and jeers, ovations and uncertainties. His inability to translate billions or trillions of Ghanaian local currency- the Cedis [ope-pe-pee-pee]; from English into Fante-Twi, which attracted cross-political laughter, excitements and ordered polity in a hitherto, a tensed up parliamentary sitting, might have been recorded in the Ghanaian Parliamentary Hansard. But Mills’ seemingly political indifference or sarcasms- and here: “Atta Mills is not a law enforcement officer…,” is worth preserving.

Thus Great Men- it is said; have controversial personalities- so uncertain characters that even long after their deaths or passing away both historians and biographers, continue to be poled apart or divided on their true beliefs or what they really stood for on earth. And since history is said to be written from class or ideological perspectives- their triumphs and tribulations or should we honestly say, glaring human failures or meekness, are either dramatized or traumatized.

So who is Professor John Evans Fiifi Atta-Mills that we mourn today?