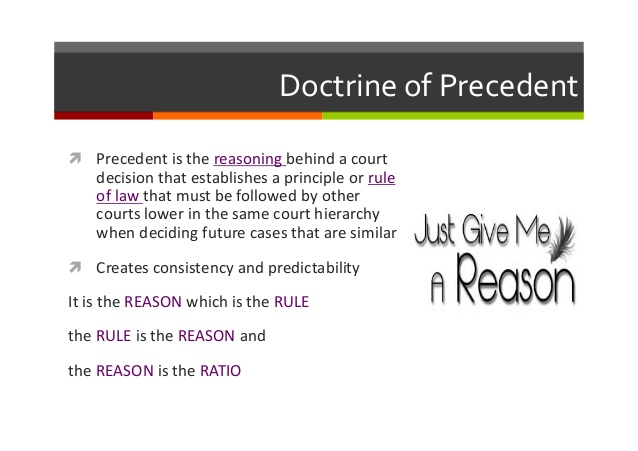 The Doctrine of Precedent and The Rule of Law

The doctrine of precedent states that all courts bind all lower courts, and some courts, at least to some extent, also bind themselves. Thus the main discussion of the doctrine is to identify as precisely as possible the extent of the independent discretion available to judges to interpret and apply the law on a case-by-case basis as there is constant tension between the concepts of separation of powers and the rule of law which requires that we should be, to some extent, able to predict the legal consequences of our conduct with some degree of certainty.

One of the most famous common law cases that focus on the precedent is R v R[1] which was heard in the Court of Appeal and in the House of Lords. It is worth noting that the HLs is higher up the hierarchy than the CA therefore, its decision could be more authoritative. In this case, the defendant was convicted for raping his former wife. He however, appealed on the common law grounds that the victim was still his wife so, there was implied consent.

Thus in Matthew Hale[2] it was reasoned that “But the husband cannot be guilty of rape committed by himself upon his lawful wife, for by their mutual matrimonial consent and contract the wife hath given up herself in this kind unto her husband which she cannot retract.” Although this quote was written decades ago, the Lord took M. Hale’s view into account in establishig whether it was still applicable in the modern conception of marriage.

This is seen in the case of Reg v. Clarence[3], where Wills J. said “If intercourse under the circumstances now in question constitute an assault on the part of the man, it must constitute rape, unless, indeed, as between married persons rape is impossible, a proposition to which I certainly am not prepared to assent, and for which there seems to me to be no sufficient authority”. The key point which Wills now raises is, where the line needs to be drawn between normal intercourse between a man his wife which has been formally consented on both sides, and where it then “constitutes assault.” There it can no longer be deemed as lawful an acceptable behaviour, as unwillingly force is being used on the victim. This statement by Wills J. challenges the wide view of precedent which holds on the proposition that consistency is a vital element of justice, fairness and improved efficiency.

Accordingly, a narrow view of precedent- the doctrine of Stare Decisis (Latin)- ‘to stand by decisions’, is sometimes, attached to the doctrine of precedent. In order for to have fairness and certainty in our system, it important for the judgements to include old and new viewpoints explaining and challenging old viewpoints and forming new principles which fit with the majority of society’s view. The question is: can we still achieve full fairness and certainty in the law of precedent moving forward when only the majority is being catered for?  Some may agree with Wills J in R v R case. Nevertheless would different cultures of society take the same standpoint? This could be one of the main negatives. But we mention in passing that there are vertical and horizontal dimensions of precedent and a distinction between the doctrine of binding precedent and res judicata (bindingness of case outcomes).

In another celebrated case of Donoghue v Stevenson[4], where the appellant sought damages from the shop, due to her consumption of decomposed parts of a snail in her ginger beer, Lord Buckmaster, relied on Winterbottom v. Wright[5]  to establish whether the third party- the manufacturers owed Ms. Donoghue any duty: “The only safe rule is to confine the right to recover to those who enter into the contract; if we go one step beyond that, there is no reason why we should not go fifty. “ Lord Atkin’s question- who is my neighbour- altered the fundamental principles covering the relationship between manufacturer and consumer.

The leading statement of principle in relation to the self-binding of the Court of Appeal in civil cases is found in Young v Bristol Aeroplane Co Ltd [6], where the Court of Appeal held that the court is generally bound by its own previous in civil cases, but went on to say that this proposition is subject to three exceptions, with the possibility of further exceptions being added from time to time.

The first arises where the court encounters two conflicting decisions of its own. Second- where the HLs makes a subsequent decision which does not expressly overrule a decision of the CA but which CA nevertheless feels is of such a nature that the cases cannot stand alongside each other- in such cases the CA will decline to follow its own decision. The third is, where the court feels it is not bound to follow one of its own decisions if it is satisfied that the decision was given per incuriam.

In Young the court felt these purposes the doctrine of per incuiam should be interpreted liberally, and this was accepted by Lord Evershed MR in Morelle v Wakeling [7], but both cases also expressed the view that liberal interpretations of the doctrine would nevertheless be extremely unusual in practice. In Williams v Fawcett[8], Sir John Donaldson MR indicated that, where the court has made a ‘manifest slip or error’, the resulting decision may be treated as being per incuriam provided that the growth of the error can be clearly detected in earlier cases, the subject matter involves the liberty of the subject and the cases are such that they are unlikely to progress to the HLs which will, therefore, be denied the opportunity to correct the error.

In conclusion I believe that in many cases as shown above, the bindingness is more apparent than real so we must identify carefully the extent of the judges’ available discretion in each case in order to create a stable, certain and fair system that benefits the majority of society.