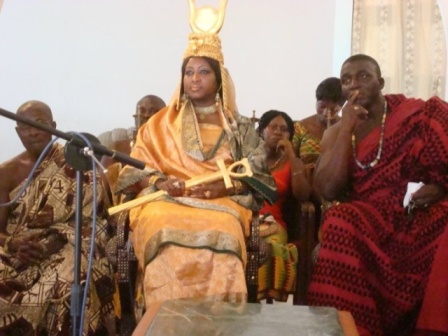 Featured- The Moot Trial of The Decade- Empress Sheba

WILLS & INTESTACY- THE PROPERTY RIGHTS OF SPOUSES CLARIFIED OR CONFUSED?

In our earlier edition- The Akan Woman, we subserviently submitted that the present state of our inheritance system that venerates the offspring of the Akan woman at the expense of the Akan man and his wife is inconsistent with modern rule of law, at least not in this age of scientific breakthrough- and here, on Deoxyribonucleic acid (DNA) test. The ambiguities and uncertainties that cloud the determined efforts of our Nananom and our court assessors/jurors in finding lasting judicial footprints are upsetting.

Of course, our attention is drawn to the passionate and single-handed proclamation of our former Head of State- Flt Lt. Jerry John Rawlings, a non-Akan leader, who had the nerve to hold the bull by the tail in addressing this age-long issue (see INTESTATE SUCCESSION LAW, 1985 (PNDCL 111, as amended- Intestate Succession Act, 2009 ). But, as to whether or not his effort is whole-heartedly received or not, is debatable. Thus, to readers who rightly referred us to Chairman Rawlings’ intestacy rules, as it will be shown here, it should be explained that it is still an unresolved concern because it offers no absolute guidance as in the rather; ill-fated arguments raised, in that Trokoshi shrine question.

Article 22(1) of the 1992 Ghana Constitution provides that spouse shall not be deprived of a reasonable provision* out the estate of a spouse whether or not the spouse died having made a will. Accordingly, Article 22(2) explains that the Ghanaian Parliament shall as soon as practicable after the coming into force of this Constitution, enact legislation regulating the property rights* of spouses. 22(3) With a view to achieving the full* realisation of the rights referred to in clause (2) of this article- (a) spouses shall have equal access* to property jointly* acquired during marriage shall be distributed equally* between the spouses upon dissolution* of marriage. To this end, Art 23 explains that Administrative bodies and officials shall act fairly and reasonably* and persons aggrieved by the exercise of such acts and decisions shall have the right to seek redress before a court or *other tribunal.

From this premise, it could be mooted that any spouse advancing any claim or interest, occasioning from degree nisse/absolute or on grounds of intestacy, must show that s/he is or was legally or customarily a spouse but not a co-habitant. That the property in question was jointly acquired during but not before marriage? Thus, we may agree that unless the assets were acquired by a joint mortgage loans from a bank or building society, these could be an issue that might defeat the spouse’s equal access claims.

The imaginary 55-year-old complainant, Mrs. Enyonam Adu-Ababio- an impressionist, and her two daughters, could have dressed in any other clothes other than black when they appeared in Moot High Court (Family Division), in Sikakrom today because Akan customs allow it, since her husband, Konrad Adu-Ababio’s death is over five years now. But litigation [and batteries] over the deceased’s 3-bedroom house at Daakye, which his family wants to possess, gives her a cause to mourn and wails for justice.

The imaginary Moot [Traditional]High Court Judge[Odikro] Mrs. Eva Ampomah-Alibamba, directed the assessors/jury that they should find for Enyonam if it could be reasonably shown that the spouse jointly acquired the property during marriage. Moot Prosecution Counsel, Theresah Yaa Br3nya told the court that Mrs. Adu-Ababio, like most loving and caring wives and mothers, was the driving force behind her husband’s success. She is legally therefore, the rightful owner of the property in his absence and needed the full protection of the law as the legitimate wife- who has now been battered. Persuasive reference was made to the English and Wales Administration of Estates Act 1925 and Inheritance Provisions Act of 1975.

In fact, the Prosecution Mrs. Br3nya concedes that Enyonam’s co-habitant- Ababio provided the purchase price of the building plot and the initial costs of the house. That despite the manifest parental opposition to their relationship due to what the pursuer sensed as cultural crush- they were not downcast and were almost set to marry until Ababio’s retrenchment, belated their plans for some years. But, in all these, the Ababios were strongly meshed? “When Abio received his cutback support, he never left me out of the picture. We jointly worked on this contested invested hoping for a peaceful retirement for ourselves and kids,” Enyonam admitted in cross examination in relation to the battery aspect of the case.

But Mr. Kofi Asante, a public relations officer, and head of the family, who claimed to have sponsored the late Chief Accountant –Adu’s education, sees it differently. He had orchestrated and fuelled the litigation and gave no breathing space from the witness box. Clad in red Akan traditional cloth, with red band on the head, symbolizing presumably unpleasant day, the educated Abusua Panin told the court, Enyonam- the impressionist, is now a household name- meaning she has had her fair share in this marriage/relationship. “She appears much richer than her deceased husband. Therefore, allowing Enyonam and her children to have absolute possession of the estate could be a curse to ancestors and the entire Asakyiri Clan that Ababio- a humble royal, respected,” he argued.

He explains that the deceased was brought up in matrilineal home when his father died. He was then two. And without the help of the abusua, Ababio, could not have had such an opportunity to put up a house of which “Mrs. Ababio” is claiming absolute ownership. Moot Defense Counsel Paul Agyeman- Atitsogbue submitted that it is generally believed that behind every successful man, there could be and truly, an industrious wife. But Ababio also owes the entire family a gratitude which probably why as an educated elite, who should have known the importance of a will, failed to make one for his dependants.

Pointing to Ababio’s surviving mother, who was seated in a wheelchair, he concluded that Mrs. Ababio’s contribution to his husband achievements is much appreciated. However, that does not give her absolute ownership of his estate while this woman is still alive? An argument that splashed and smeared the yawning and frustrating faces of teeming women groups, artists and human rights activists. However, applying the Abusa Panin’s argument to Enyonam’s mooting and the constitutional provisions set out above, the assessors/jury are still pondering over whether or not, Enyonam, might have some interest in this real estate at all. How could this be? Well, from the facts in this imaginary case case with some element of criminality, it is rational to assume that the property was acquired when Enyonam was still a civil partner to Adu-Ababio- hence Moot Court Judge Mrs Hawa Ampomah-Mallam’s worries?

Having directed the assessors/jury to establish whether the spouse jointly acquired the property during marriage and what is meant by spouse in our polygamous society, where it could also be a taboo in assuming or acknowledging the existence of gay and lesbian rights, the court failed to hammer out the boundaries of law and morality, which otherwise, yes, would have been construed without difficulty in most jurisdictions. In honest truth, there may not be anything which can explain why the jury/assessors are dragging their feet until 15 May 2007. Some pundits reason that it is because of the ambiguities in the constitutional provisions that true, only Parliament/supreme court has the supreme mandate to clarify?

We may not believe this to be problem but granted that we accept this; it seems undeniable that there are other cases that also need further consideration. In England and Wales, for example, where a person dies wholly or partially intestate, the order of persons entitled to share under the intestacy is determined by s.46 of the Administration of Estate Act 1925. Where the intestate survived by a spouse, the spouse is entitled, inter alia, to the personal chattels (carriages, horse, stable furniture- ?articles of personal use??) as defined by s.55 (1) (x). There are specific exclusions for items used for business purposes. The intention is to cover items of personal and domestic use and ornament. Where an item falls within the definition, the item will pass to the surviving spouse absolutely, without inheritance tax. Thus, it might be instructive to note: Enyonam would have had everything whether or not her husband did make a will.

Yes, the fact that English law provides a discretionary system under the Inheritance (Provision for Family and Dependants) Act 1975, whereby testator’s will or the application of the intestacy rules can be adjusted, it is potentially conducive to litigation. But the importance of the 1975 Act, per Borkowski (2002, p252), cannot be measured alone by the amount of litigation thereby generated which has actually not been as great as was feared. For the mere possibility of an application being made under the Act, must be a vital negotiating factor in numerous disputes which never reach the court. Thus under the Act, certain persons can apply for reasonable financial provisions out of the deceased’s[Ababio’s] estate on the grounds that his/her will or intestacy makes no reasonable financial provision for the applicant.

As a surviving spouse, had Enyonam been subjected to this jurisdiction, she would have had the matrimonial home absolutely if she survives 28 days after his husband’s death. Even former spouses who have not remarried, or children, step-children, dependants and cohabitants have a place under s.1(1) of the 1975 Act. No one is suggesting that we turn blind eye on our rich cultural practices or assimilate it into a version of neo-colonial proxies. But no one is also suggesting, either, that we let superstitious beliefs that appear to have been deemed inconsistent with our modern democratic norms obstruct equal rights, obligations and justice. For example, consider the property rights of the speculated 36 wives of our late Ya-Na. It is precisely against these future uncertainties that we will need to have national concept. Call it, a reformed customs to save vulnerable spouse as much as we need freedom and justice.

In this context, Parliament, having the changing legal definitions of a spouse and property in mind, must recognise that the current provisions in Art 22 of the 1992 Constitution are inadequate to take care of cohabitants and spouses such as Enyonams and more forcefully, those rumoured to be in same-sex encounters, who now that we have opted for democratic rule, must also be protected under the law? Enyonam’s case is traditionally complex but the untold sorrows of trokosi captives could be haunting. To accept this truth and unmask what makes rich customs in our present position is as crucial as the Akan succession ailment that is wailing for rigorous purge.

[This Moot Trial is written without the consideration of Ghana’s Intestate Succession Act, 2009]

Asante Fordjour authored/posted this article (updated/revisedhere] on GhanaWeb on 26 April 2006.