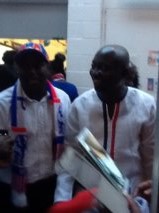 Atta Akyea Speaks on Akufo-Addo for 2016

…Shirley Ayorkor-Botwe states yes. As Samuel Atta Akyea flies Akufo-Addo 2016 Campaign under the theme: “Ghana Deserves a Leadership that Thinks of the next Generation not the next Election.”

Supporters for Nana Addo-Dankwa Akufo-Aaddo’s bid to win the NPP Presidential Primaries to lead the party for the 2016 presidential election launched their colourful and mammoth campaign at the Chestnut Community Centre, Saint Ann’s Road, Near St Ann’s Hospital, in North London, the United Kingdom.

Shirley Ayorkor-Botwe- the Honourable Member of Parliament for Anyaa Sowutuom, had sought to make a strong case that with the level of corruption, visionless leadership and economic stagnation and hopelessness and abject poverty in the country under the leadership of President John Dramani Mahama, of the ruling National Democratic Congress (NDC), Ghana needs the twice failed presidential candidate of the New Patriotic Party (NPP)- Nana Addo-Dankwa Akufo-Addo, never than before, at the Jubilee [Flagstaff] House, come 7 January 2017, so as to continue the said good works of Ex-President Kufuor.

The former minister under Kufuor’s government- whose speech followed that of lawyer Atta-Akyea: the heir MP of Nana Akufo-Addo, seemed to suggest that there are 100s of sitting NPP MPs, who openly support Nana Akufo-Addo’s political rematch. Of the 275 seats in the republic, the ruling NDC wields 147, while NPP has 122. Whereas the Independent candidates totals four, the pro-Nkrumahist parties- the People’s National Convention (PNC) and the Convention People’s Party (CPP), have two legislators.

In his keynote address delivered on Sunday, 15 June 2014, at the Centre, Samuel Atta-Akyea- the Honourable Member of Parliament for Akyem Abuakwa South, in the Eastern Region, made a rapturous and passionate appeal with his childhood hymn: “Me Wo Nyame- which he said his grandma- Awurama Kyerewa, used to sing at dawn and remains Nana Akufo-Addo’s favourite. He assures the organizers that making Akufo-Addo a flabearer of NPP for the 2016 presidential election is not a problem if you are coming from Ghana and that in any serious fight they must leave it first with God before their plans.

Backsliding from the traditional NPP slogan: Kukurudu- Eshi rado, rado, and perhaps, signaling warning to potential detractors of Nana Akufo-Addo’s presidential ambition that the current presidential project could no longer be negotiable, the Abuakwa South MP electrified the gathering with the following rehearsed slogan by tutoring the excited followers of Nana Addo that whenever he sounds: Kukurudu, they should response first: our eyes are red than before; Kukurudu- you will not step on our balls twice; and last but not the least, Kukurudu- there will be no Supreme Court- Jubilee House, Jubilee House!

Touching on the 2012 election rulings of the Supreme Court and of course, GYEEDA, SADA, ISOFOTON and legally or administratively, all the established odds and economic challenges or scandals bedeviling or hanging around the neck of the Mills-Mahama or NDC-led administrations, the mobbed lawyer Atta Akyea, who said he is in UK by the providence of Commonwealth Association of Parliamentarians meeting at the Westminster, said he finds wisdom in the Akufo-Addo’s 2016 attempt.

To paraphrase the words and the calculations of the Akyem Abuakwa South MP who arrived in London from Accra on the very day the Akufo-Addo 2016 initiative was being staged but for the wise decision of the organizers desire to see Nana Addo as the NPP’s chosen flagbearer and eventually, president-elect, come 7 December 2016, the MP said: “Nana Addo has expended some 37 years of his adult life in the service of Ghana- in politics and the legal practice. “No one can point a figure at Nana Akufo-Addo that he is corrupt. Yet people ask whether any good thing come out from Akyem Abuakwa South?” Hon Atta-Akyea believes that Ghana is going to have a president who comes from Akyem Abuakwa.

According to the Abuakwa South MP, Akufo-Addo is often vilified, attacked and struck down without just cause but he is never destroyed because he has God who never slumbers. This is embedded in Akddo’s favourite Twi Hymn-“Me wo Nyame”. Atta-Akyea sums up Nana Addo’s reconciliatory traits and political tribulations, submitting that the former Attorney-General and Foreign Minister, functions in the spirit of Mother Theresa, who once observed: 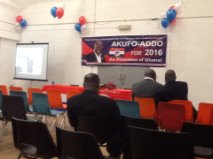 People are illogical, unreasonable, and self-centered.
Love them anyway.
If you do good, people will accuse you of selfish ulterior motives.
Do good anyway.
If you are successful, you win false friends and true enemies.
Succeed anyway.
The good you do today will be forgotten tomorrow.
Do good anyway.
Honesty and frankness make you vulnerable.
Be honest and frank anyway.
The biggest men and women with the biggest ideas can be shot down by the smallest men and women with the smallest minds.
Think big anyway.
People favor underdogs but follow only top dogs.
Fight for a few underdogs anyway.
What you spend years building may be destroyed overnight.
Build anyway.
People really need help but may attack you if you do help them.
Help people anyway.
Give the world the best you have and you’ll get kicked in the teeth.
Give the world the best you have anyway.

In the opinion of the organizers of the event, the corruption-ridden government of Prez John Mahama could only be overthrown by the leadership of Nana Akufo Addo. They therefore, likened the NPP with its teeming presidential aspirants as husband with too many wives, who more often than not goes to bed hungry. “We are still the divorcee wife and husband ready to come back together for common good,” they said. In the opinion of the Akufo-Addo 2016 campaign organizers, the coming together for the NPP must see Nana Addo, described by Atta-Akyea as incorruptible and well-cultured, as the next NPP leader and President of the Republic.

It is submitted that unlike those politician who by virtue of their distressed family backgrounds enter politics with the desire of bettering their situation at the expense of the state, the contrary is of Nana Akufo-Addo, whether it relates among others, to the sleeping in good hotels or eating good joloff rice. “Nana Akufo-Addo has seen it all. That’s why he will not steal Ghana’s money…his whole attitude is to serve. “By the circumstance of Akufo-Addo’s birth makes him a man of destiny,” Hon Atta-Akyea said with spontaneous clapping and wailing affirmations from the over 200 NPP stalwarts and sympathizers.

Thus of the six founding-fathers of Ghana- otherwise known as The Big Six: Joseph Boakye Dankwa (aka J.B. Dankwa); Dr. Kwame Nkrumah, Mr. Obetsebi-Lamptey, Mr. Ako Adjei, Mr. Edward Akufo-Addo, and Mr. William Ofori Atta, Nana Addo-Dankwa Akufo-Addo, is said to have blood-link with three of them. The Big Six is tied to the leaders of the United Gold Coast Convention (UGCC) who were arrested and detained under the Emergency Regulation in 1948 during disturbances in the Gold Coast.

Notwithstanding the above, Nana Addo-Dankwa Akufo-Addo, the former Attorney-General and Minister for Justice who also became the Foreign Affairs Minister under President J.A. Kufuor’s government, seems to have carved political and diplomatic niche for his personality. So Atta-Akyea states that those intending to contest Nana Akufo-Addo will be like tennis contest between him and Serena Williams of tennis fame. “Anybody [NPP supporter] who watched the Supreme Court hearing thinks he did not lose. Akufo-Addo won the 2012 election and therefore must not be changed if you are a true NPP.”

Atta-Akyea had said in his delivery that Nana Akufo-Addo had been washed clean through his political career and therefore; if a new person is presented now, it is going to problems for NPP as unknown problems are going to be exposed. “People say Akufo-Addo is old but see Caleb in the Bible. He was 80 years old when he led the Israelites to war. Although when Akufo-Addo studied in the UK his parents paid fees for his education yet, he intends to bring free Seniour High School to transform the Gugisberg economy. “Mahama government has no future for Ghana and there is a need for a regime change. Mills- “Mahama administrations have specialised in borrowing but not in thinking,” Hon Atta-Akyea argues.

To the Akufo-Addo for 2016 campaigners who might not be eligible voteres, the Akyem Abuakwa South MP advised them to use their remittances power to monitor their voting because of the future of Ghana and Nana Addo who just wish to leave a legacy. “There is no politician who is being afraid of by the NDC than Nana Addo…. It is only in Ghana where if someone is not having a contract with government they have to pay him… Over Gh50 million GYEEDA tree planting is like Asante, not having fish to eat but decided to come to Accra to plant cocoa trees on the sea,” Atta-Akyea puzzles.

The Honourable MP educates his audience that in Ghana now, our resources are being channeled for debt services although God seems to have blessed the NDC government more than the NPP or Kufuor’s government who never had oil money. But corruption and mismanagement appear to be NDC’s greatest enemies. The architects of the Akufo-Addo for 2016 have on their shoulders what they term as “Know your delegate project”, intended to help Nana Addo win the NPP impending primaries and the presidency, without insults and falsehood so that he can help deliver Ghanaians from slavery in their own country.”

Nana Addo is said to have shown a sign of gratitude to the organisers. Taking inspirations from the leaderships of Robert Mugabe of Zimbabwe and the late Nelson Mandela of South Africa, Hon Samuel Atta-Akyea seems to dismiss the health concerns raised by the opponents to Nana Addo’s presidency, stating that though he is below the age of 60, his various campaign trips with him make it difficult to brush aside the enduring stamina of Nana Addo who is at relative age of 70. He was quick however, to add that if knowingly NDC did same to Mills, why not Nana Addo, who could go for one term or more?

JusticeGhana observes that the majority of the organizers of the event were former NPP UK-Ireland Executives, who included but not limited to Ex-Chairman Atta Akrufi and Major Affum-Dankwa (rtd). Some current executives present were Richard Dombo: 1st Vice Chairman and Justice Appiah Antwi-Youth Organiser. Other dignitaries were Madam Susan Akomea, Nana Ohemaa Dokua and Executive-Secretary of NPP UK- Mr Edmund Sekyere. Antwi Bosiako and Andy Owusu, were MCs of the event.

This special report is filed without the inputs of Mr Gabby Asare Otchere-Darko, of the Dankwa Institute (DI) and Hon. Ursula Owusu, who our source says wonders who is going to camapaign for the NPP if the speculated Agenda 2020 designed to thwart Nana Akufo-Addo’s 2016 bid were to be implemented. On Monday, 16 June 2014, lawyer Adraba Abrefa-Damoa sought to inform WBLS radio listeners that the Akufo-Addo for 2016 project is grounded to offer a fair counter-weight to groups such as Okatakyie Kwame Opoku-Agyeman’s Get Alan Kyerematen Elected (GAKE) presidential crusade. Okatakyie & Co appear to be worried about the steady decline of NPP’s electoral fortunes since 2008.

……
Reporters’ Note
The event scheduled to have started at 18PM, took momentum at about 20PM, where conservatively assessed, the over 200-capacity centre, could no longer contain its rising guests who had to find spaces on the centre’s corridors. Accordingly, JusticeGhana could not cover the delayed programmes due to other engagements. JusticeGhana was at the Chestnut Community Centre from 16:50 to 21:00HRS.