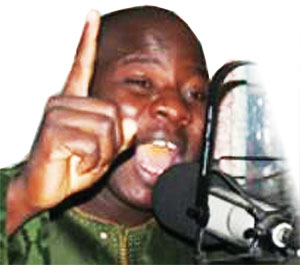 All around the world, the social democrats that we had known- be it in Africa, the Americas, Asia and/or Europe, fight to support and retain crucial state enterprises for the people but help not destroy it for their selfish interests.

But the Social democrats we have come to know in Ghana, as the Ayarigas are making us to understand are indeed brutal starving capitalists, hiding behind the cloak of this noble ideology to advance their own self-seeking future at the expense of the masses that they claim to champion their cause.

So the said group of farmers from Bawku Central Constituency, where Mahama Ayariga once presided as an MP, are right to have called on our newly-elected Social Democratic President John Evans Atta Mills, who had promised transparency, the rule of law and equity as cornerstones of his government, to investigate the purchase of state tractors by his spokesman- just after he assumed office.

According to Daily Guide news reporter Bennett Akuaku (Ayariga Is Hot, 28 June 2009), Mills’ spokesperson is said to have grabbed five tractors in the name of establishing a Mechanization Centre to assist in what it is termed as underprivileged farmers in his community, but which, according to the report, has rather incurred the displeasure of the said needed farmers in that contrary to the assertions being advanced by Hon. Ayariga that the tractors were being hired for GH¢10 to plough an acre of land, the farmers were being charged GH¢25?

In the opinion of JusticeGhana OmanbaPa Research Group, what makes this report devastating is the seemingly resemblance of the ongoing encounter over the alleged purchase of state cars at relatively lower price by former ministers and functionaries of the recently-defeated Kufuor-led National Patriotic Party (NPP), which has prompted the erstwhile main opposition new NDC regime, to indeed reconsider importation of new cars for government business.

Under the heading: “Castle Is Short of Cars”, readers might recall Citifm report (01 April 2009) and the then lamentations of the Deputy Chief of Staff- Mr Alex Segbefia, over shortage of state cars, especially saloon cars, which the former die-hard CPP activist attributed to officials of the former Kufuor-administration.

In that report, Segbefia who also described as immaterial, accusations that young men in President John Mills’ administration have been given expensive cars to drive, contended that the NDC government has not bought a single car as far as he was concerned and that all the vehicles that are being spoken about are vehicles that were inherited, forcefully questioned whether they- and here the recently sworn-in NDC officials- should put all those cars in a garage and get on bicycles to go and do their job.

The issue here is that like in the early days in Kufuor-led NPP government (2001), squabbles over State vehicles, has again dominated the headlines ever since the Atta Mills’ promised “lean and open” regime which promised to reduce petroleum products drastically, took office after fiercely and indeed tightly contested general elections some six months ago.

The aftermath of this “Positive Change” for a better Ghana, as JusticeGhana sees it, has led to the National Security operatives impounding several saloon cars, believed to have been clandestinely acquired and/or misappropriated by former government officials.

Although some of these suspicions, as the case(s) of Nana Akufo-Addo, a Barclays Bank Manager and Chief Kufuor, had been a “hoax”, the Deputy Chief of Staff- Alex Segebfia, who appears to have been entangled in the Muntanka Saga, had argued that the sale of such cars- especially those imported for the 50th anniversary to former ministers and officials of Kufuor’s regime, has greatly reduced the number of cars at the Castle, leaving some Ministers without state vehicles and so, the need for Government to buy brand new cars to fill the void?

Indeed state practice on our transitional process- here, handing over and ushering in new leadership, suggests that outgoing state officials are allowed to buy cars that are two or more years old. Yet assuming this rule is being followed and applied, is it morally right for Ministry of Agriculture to allocate five tractors to Honourable Ayariga- the former MP of Bawku Central Constituency, who has his controversial “generous ex-gratia” secured out of the taxpayers’ money?

It seems to JusticeGhana OmanbaPa Research Group that the glaring politicization of bidding process within the state institutions by political leadership, is weighing heavily on the state finances and national development.

How can’t Social Democrat Mahama Ayariga who has all the diplomatic and financial might and influence to travel abroad, import such similar tractors himself or encourage his people to embark on co-operative venture if he thinks that individually, they lacked the financial resources to buy such equipments?

The disturbing allegation is that a Mr. Yusif Seidu Bagura- spokesman for the said concerned farmers, who according to Chronicle, is also a maize farmer, is said to have told the media that whenever one applies to hire the equipment that had been bought cheap from the state, one is puzzled whether s/he belonged to the ruling National Democratic Congress or the opposition New Patriotic Party- stressing indeed that people are being put-off because of their political beliefs?

DAILY GUIDE reports that Mills’ Spokesperson, on 31st March, 2009, wrote to the Minister for Food and Agriculture, saying he had previously applied for two tractors and had paid some money, but would love to be considered to purchase additional three tractors, bringing it to five for him alone. On which publication did Ayariga see this advert? According to the report, Hon. Ayariga made a paltry GH¢10,000 initial down-payment for all five tractors, instead of GH¢50,000.

From the controversial divestiture or call it, privatization of GIHOC (Nsawam Canary), which Mrs Agyeman-Rawlings, the wife of the then sitting-president- secured the bidding, more recently, the masses challenged the alleged attempt by Hon Jake Obetsebe Lamptey- from buying state bungalow. With these, not forgetting numerous allegations over the sale of public-funded low-cost estates to political functionaries and sympathizers, one is prompted to pose this recurring question- when will politicians learn from their troubled past?

In our present inquiry, it is alleged that there were some fishy deals in the “auctioning” of the tractors bought by the previous NPP administration to be operated by the state which is now being privatized by the Mills-led Social Democratic regime, whose members are the alleged beneficiaries?

Mr. Bagura is quoted as saying that instead of using the tractors for developmental projects, the caretakers of the tractors were using them as a campaign tools, and for this reason, questioned how five state tractors, could be allocated to only one person- and here, nobody than Presidential Spokesman Mahama Ayariga, who as JusticeGhana could honestly speculate, spends much of his energies and precious time in some thousand miles away from Bawku in Accra, to defend NDC policies?

Indeed like many others, as Kwamena Bartels- the former information minister and a chairman of a panel that operated government/private loan scheme forcefully attempted to defend the justification in allocating “soft loan” to her daughter and boyfriend, Ayariga insists there had been no inside trading between him and the political leadership at Agric Ministry.

Yet, we are persuaded by the ongoing perception that the current bidding, as Mr Bangura’s suspicions and appeal to the President suggest, could be exploited indirectly, where political leadership, as it had always been in our world, were to be in charge of hiring and releasing of such tractors for ploughing in this impoverished part of Ghana, where things, as Daily Guide put it, had worsened as a result of the unavailability of farming equipment and, in the opinion of JusticeGhana, ridden with doubts and insecurity.