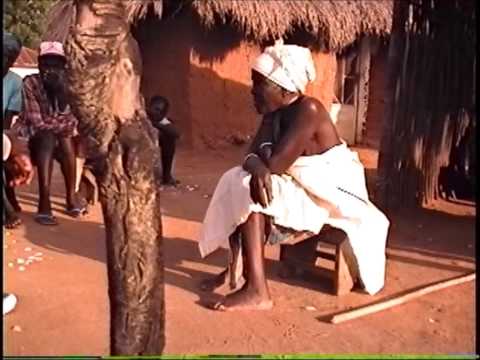 Photo Reporting: The Clashes of Different Cultures in Ghana

I’m going to discuss ‘the different clashes of cultures’ in three stories which I recently read in school and are similar because of opposed views on modernisation and traditions.

The first story Dead’s Men Path (Chinua Achebe) talks about two main characters: Michael Obi and a Village priest. Michael wants a path removed which is connected to the school and the village but as he’s the new headmaster he doesn’t see the importance in it. On the other hand we have the priest who believes the path should remain for it’s historical heritage. This is how the cultures clashed. A quote that I inferred from the writer was ‘let the hawk perch and let the eagle perch’. This makes it visible that even though both of them had their differences they should put them aside and compromise.

The next story (Bessie Head, Snapshots of a Wedding), is based on love or wealth where a young man finds himself choosing between those two. Neo an educated woman, however, with no manners ((Mom often says in Fanti: beauty will send you but character may bring you back!)) is in a relationship with Kegoletile a man who is soon to wed her. There we have Mathata our ordinary village girl completely uneducated but humble and caring. I infer this information from: line 105: ‘Kegoletile would be far better off if he married a girl like Mathata, who though uneducated, still treats people with respect.’

The last story- ‘The Train from Rhodesia (Nadine Gordimer), is based on the rich and the poor- a family or could I say people who have settled in the area for a long time and are hustling to establish a better life for themselves. I illustrate first the Dead’s Men Path:

Cultures clash in ‘Dead men’s Path’ involves a clash over a path that has been there for decades which a priest in a village wants it to remain and a new head teacher Michael who takes on a new school opposed. Michael wants to turn the school and everything surrounding it into a progressive environment? Nancy the wife of Michael is completely delighted by all of this and takes this opportunity to turn the school into a place of beauty. I can deduce this information from line 15: ‘we shall do our best,’ she replied. We shall have such beautiful gardens and everything will be just modern and delightful…’

This shows she had far more interest in herself and livelihood than for the school- someone who was materialistic and looked at the outer beauty rather than the inner.

The priest nevertheless argues that the path should remain as of it’s significant meaning not only to him but also to the entire village. I deduced this information from line 85: ‘Look here, my son,’ ‘this path was here before you were born and before your father was born. The whole village depends on it,” said the priest pointing down his walking stick. I feel this shows how much the priest cares about the whole community and all the fallen heroes in the village who might have fought or putting their lives at risk for other people. The priest was in the right as he had more experience in life than Michael Obi.

We should learn to accept anyone whether older or younger even though it’s best to listen to our elders. As this story comes to an end, teacher Michael finds himself in a catastrophe as his work has been ruined. We can infer this information from line 105:

“Obi woke up next morning among the ruins of his work- beautiful hedges were torn up not just near the path but right round the school, the flowers trampled to death and one of the school buildings pulled down…… so not every story has a happy ending.” Society in this story played a big role in most of the decisions which proves freedom of speech.

Section 2: Snapshots of a Wedding 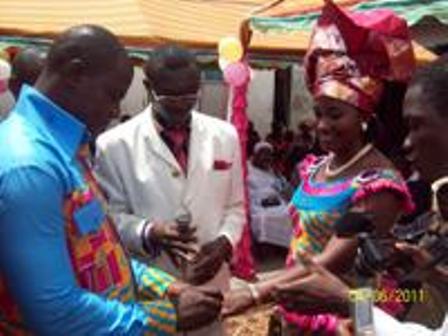 I will embark on starting to converse about the story snapshots of a wedding. A story which is based on money or love cultures clash in this dispute over a young man Kegoletile, who is torn and needs to make a good decision on two women he’s going to marry: Neo an educated woman yet no manners and lack of self- respect. On the other hand, we have our ordinary Village girl Mathata, who as expected, was as down to earth as roots of a flower and had lots of respect for people surrounding her. Mathata was grateful of what she had and told Kegoletile how she taught she already had enough.

We can deduce this information from line 75: ‘Ow Kegoleitle, how can I wear all these dresses? It’s just a waste of money ….!” Which shows how humble she is and those traditional values are important to her. Neo however was brainwashed by modernisation and as she prepared to wed Kegoletile she made sure there was a quick wedding ceremony going deeper. I share Neo was non-religious and wanted a modern wedding.

Kegoletile was being misled by all of this and was just chasing after the money as one of the relatives remark. I discovered this in quote line 70: ‘He thinks that since she is educated as he, they will both get good jobs and be rich in no time…. Adding my own commentary to it we can find out that on line 60 the writer states: he was rich in the cattle and they wanted (Kegoletile’s relatives) to see what they can get. We believe that Neo’s relatives were in the right as they wanted the best not only for her but also for Kegoletile. They knew as soon as both of them would get married they would officially be part of Kegoletile’s family and that their problem was going to affect them equally.’

The story means being humble will bring you far. Many personages will end up trusting you and respecting you in whatever position you are. Even though Mathata was a village girl and uneducated people taught of her as a far better person than Neo. “All of us should know by now that money doesn’t buy happiness Kegoletile was the complete opposite and ran after the money rather than the characteristics.” The society in this story proves that money mattered at that time not only for the bridegroom but also for the external family. And that these manners were taken more seriously than education.

Section 3: The Train from Rhodesia 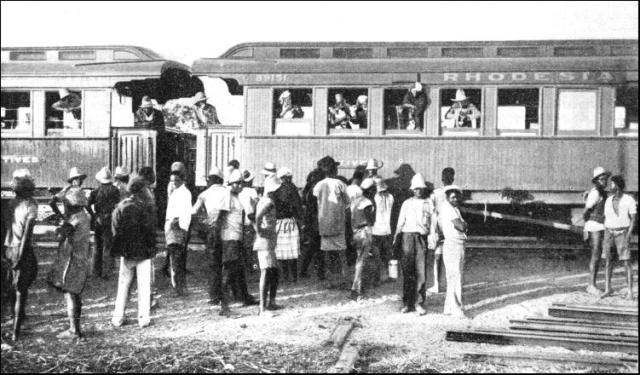 Photo Reporting- The Train from Rhodesia

I am coming to the end of my last research story; I am reporting the vital clashes of cultures. Which I believe are clashes between the rich and the poor and the verbal distinction between the two. Here we have natives who are settled in their land and hustle to make it through life by selling all kind of goods as we can say the unfortunate ones. I inferred this information from line 5: The stationmaster’s barefoot children wandered over. From the grey mud huts with the untidy huts that stood within a decorated mud wall chickens, and dogs with their skin stretched like parchment.

By reading this paragraph it makes it clear how impure the environment was and the humankind living in it. We learn the natives were artists who made wooden animals and sold them. We also see child labour where little children like me, have to sell and the customers who come to buy the goods, have much easier life. I deduced this information from line 55: past the dogs glancing up at the dining car where he could stare at faces, behind glass, drinking beer etc. This shows how much they were enjoying themselves.

“I have a very sensitive feeling towards the natives as they live in life threatening conditions there was no big dispute but thinking made it so. The story means there will always be contradiction between us humans. Nothing can change it- we’’ll all be treated in different circumstances as here rich or poor /able or disabled/ deaf or blind.”
Thus we all get treated different so we should be happy with ourselves… as on the other side of the world people won’t be able to get food and have to steal instead appreciating your loved ones and what they do for you. It is said that the society used in this story is too old-fashioned not modern as at that time family would have been definitely taken very seriously as that was the only backbone the poor native had in Train from Rhodesia.

All in all, each and every single story had modernisation and undistinguished values clashing. The only unequal signs identified between the stories were the people and the settings and how mankind and places took actions. It is argued that specific writers decided to speak of the ethics of modern Africans and traditional Africans. Others unambiguous- kept it unexacting for they used the usual cliché and old historical quotes. 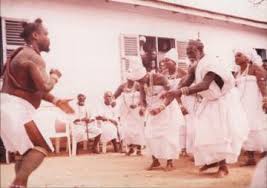 Photo Reporting- The Brief History of The Ga Peoples

“Every individual should be able to resolve cultural conflicts between family or society itself and use it for their own daily life and apply it to themselves. Many different cultures have their own way and their own convictions.” Each story makes it clear to us that humans misjudge each other and have prejudice ways of acting and that it’s our responsibility to make the available first impression. Though born in Europe and have travelled only once to Ghana, I’m passionate in reading about Akwambo, Addae, Ohum, Odwira and not least, the Homowo festivals. So, as a child with Fante, Asante-Akyem, Akuapem and Ga gene/lineages, you may certainly not call for the destruction of these…!

To conclude I would like to say that ‘Snapshots of a wedding’ impacted on me the most as it teaches me that to be respected you don’t have to have the education or money but knowledge to do good unto others and being humble. My great-grandees had these!

At the same time, `Snapshots of a wedding made me think about the historical context as the story is being played in Africa. I felt that since African countries were colonised and led to their independence, they seemed enslaved by the European mind and changed the stereotypical view about them. Dad suggests how vital it is for us to gain our roots and traditional teachings but many are forgetful where they started and ended.

My thoughts: “Obedience is the key and being unique- the leader not the follower makes a way for others so when you leave, you know your work is done.” Yet, many say that ‘If times changes we need to keep up with them’. But what if that time is wrong…? I nearly clashed when our class teacher (8K6), asked us to research about historical and cultural importance/background of our individual names, ethnicity and national origins!